Getting The News Too Late 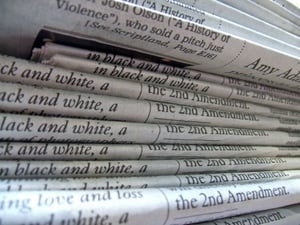 If you’re not aware of the story of World War II Japanese soldier, Hiroo Onoda, you are missing out on an incredible story. During the war, he was dispatched to a small Philippine island with strict commands to do all he could to fight off enemy attacks and to destroy key sites on the island. He was instructed that he was not to surrender for any reason and he would be given further instructions by his commanding officer. This occurred in December 1944 – a date to remember.

As we know, the Japanese surrendered to the United States nine months later in September 1945. However, soldier Onoda had not received any such notice from his commanding officer, so he remained vigilant to his instructions and took refuge deep into the woods.

There were many attempts by the Islanders to give him information on the status of the war, but he thought it was a ploy from the enemy to get him to surrender. It wasn’t until his former commanding officer, who had since become a bookseller, had to go to the island and officially relieve him of his duties that he came out of the woods. This occurred in March 1974 – nearly 29 years after the war had ended!

Ultimately, in those 29 years, an unnecessary amount of time and resources had been lost due to information that was poorly managed.

Although, not nearly as incredible as the story of Hiroo Onoda, similar stories occur each day as companies try managing their transportation tasks with information that is poorly managed. This is especially evident when the status of a shipment changes, and no one is alerted to these changes in a timely fashion.

The world of logistics is changing before our eyes. Thanks to the increased availability of information and technology, coupled with a greater demand for shipments to arrive sooner and within tighter time restrictions. It’s imperative to have real-time information on the status of everything that is coming inbound to your facility or on its way to your customer.

Similar to the case of soldier Onoda, an unnecessary amount of time and resources are lost when information regarding a change in shipment status is not conveyed immediately. When a customer calls you to ask where their expected shipment is, it’s too late. When your receiving team swings open the doors of the truck and your purchase order isn’t on it, it’s too late. When a pallet ends up in Albuquerque on the 13th and it was supposed to be in Newark on the 12th, it’s too late.

When a company partners with the services of Jarrett Logistics, there are several resources and real-time processes that provides this company proactive information regarding the status of their shipments. We can’t keep the pallet from ending up in Albuquerque, but we can give you information that will allow you to be proactive rather than reactive.

Dedicated Support Team – every Jarrett Logistics client is assigned a dedicated daily support team, from the JLS Routing Center, that tracks, real-time, the status of every shipment coming into or leaving your facilities. This team is not only an extension of your transportation department, it becomes the eyes that have constant visibility to every shipment every minute.

This team is dedicated to contacting you as soon as the status changes for any shipment. Not only do they keep a constant eye on your shipments, they provide current weather updates. You have no reason to think your shipment just got delayed when it’s 68 and sunny where you are, but a snow squall coming across Lake Erie just caused a traffic pileup and shut down the highway for 6 hours. Your dedicated team will let you know when weather-related events occur that impact your shipments.

Access to Real-Time Information – it’s not unusual to receive some type of daily transit report from your 3PL or carrier. It’s pretty handy getting that information every morning, with shipment status information. But what happens if something goes wrong after the report is run? Typically, nothing. You will not receive updated information until the next report is run – which doesn’t do you or your customer much good.

Jarrett Logistics provides a daily status report every morning; we will make you aware of a shipment status shortly after it happens, not at 9:00 am the next morning. Someone from your dedicated support team will contact you with the information you need to make proactive decisions rather than reacting a day or two later.

It might make sense to review this portion of your transportation management processes – and consider contacting to Jarrett Logistics about providing you accurate and real-time information when shipments change their status. I can’t say for sure if Hiroo Onoda would have listened to his dedicated support team from Jarrett Logistics, but I can say for sure that he would have received his information quicker and could have saved wasted time and resources. Begin your journey to real-time information with a dedicated support team at your service.